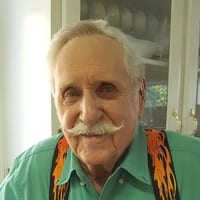 George (Pete) R. Cross, passed away at the age of 93 on October 30, 2018. Born in Santa Fe, New Mexico in 1925, he was the son of Price and Julia Cross. The family moved to Georgia where Pete graduated from Avondale High School. He was a track star and president of his senior class. He was also a lifeguard at the Avondale Pool.

In July of 1944, at the age of nineteen, George was drafted into the Army and attended boot camp at Fort Bragg. Shortly thereafter he was deployed to the front lines in Europe with the 335th Infantry as a light machine gunner. George received the Bronze Star along with several other medals and awards while serving his country during WWII.

After the war, George returned to Georgia and studied art at UGA. In 1951 he started his career with Eastern Airlines and retired after 34 years. In the early 90s, George and his first wife Louise moved to Jasper, Georgia where he joined the Bent Tree Tennis Group and was fondly known as the “Spin Doctor.” He played tennis well into his 80s.

In 2011, Pete married his neighbor Carole and together began a new chapter in his life. George was well known for his creativity as an artist, his quick wit, and his love for jazz and big band music. He was very patriotic and deeply proud of his country and his service in WWII. He will be greatly missed by his family and friends.

George is survived by his wife Carole of Jasper, Georgia and step-son Thom of Coal Mountain, Georgia. He is predeceased by Louise, his wife of 50+ years. George was laid to rest in the Cross Family plot in a private service. The Cross family appreciates your donations to Pickens Animal Rescue in lieu of flowers.