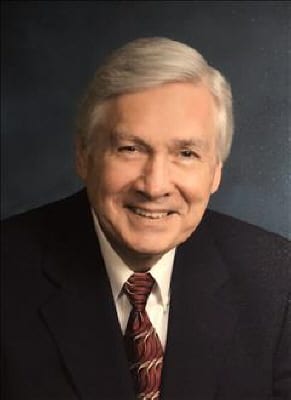 James A. Moore (“Jim”) died with his family by his side on Saturday, December 15, 2018 after a long battle with Parkinson’s disease.
Jim was born in Memphis, TN on January 14, 1943. He spent summers as a Boy Scout camper and counselor at Old Kia Kima in Hardy, AK and earned his Eagle Scout before graduating from South Side High School in 1961. Jim married his high school sweetheart, Bonnie Cole, on December 14, 1963. He earned his bachelor’s degree from Memphis State University in 1965 and continued working towards a graduate degree. He retired from Sanofi-Aventis in 2002 after a 36-year career in the pharmaceutical industry. Jim and Bonnie moved to Big Canoe, GA in 2003 where he loved to hike and watch sunsets with his beloved wife of 55 years.
Jim is survived by: his wife, Bonnie; daughter Ashley Moore Cromwell; son-in-law Craig Cromwell; grandchildren James and Amelia Clark, and Tyler, Kate, and Grant Cromwell of Cumming, GA; daughter Alyson Moore Ebaugh; son-in-law Nevin Ebaugh; grandchildren Charlie, Michael, and Russ Ebaugh of Boone and Charlotte, NC.
A memorial service honoring Jim will be held at the Big Canoe Chapel on Thursday, December 20, 2018 at 3:00 PM.
Arrangements are entrusted to the staff of Roper Funeral Home & Crematory in Jasper.
Online condolences can be made at www.roperfuneralhome.com .