PICKENS, Ga. — The Jasper City Council oversaw the swearing in of Mathew Dawkins as Police Chief and John Sherrer III as Fire Chief during their April 4 meeting. The retirement of Fire Chief Steve Roper was also recognized by the council.

Mathew Dawkins, previously Interim Police Chief, was sworn in as Police Chief by Mayor Steve Lawrence. Dawkins was selected for the position during a nationwide search conducted by the city council. Noted in a press release from Mayor Lawrence, Dawkins has worked with the Jasper Police Department for 14 years, and will start as chief as soon as April 15, 2022. 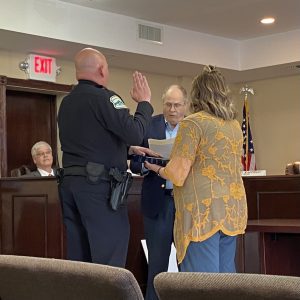 Police Chief Matt Dawkins was sworn in by Mayor Lawrence. 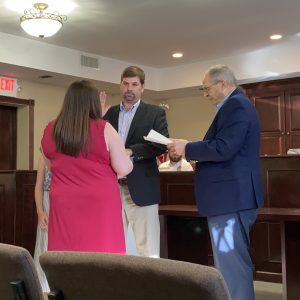 John Sherrer III was sworn in by Mayor Lawrence.

Fire Chief John Sherrer III was also sworn in by Mayor Lawrence during the meeting. Sherrer was similarly chosen by the council after a nationwide search and will begin working with the city as soon as April 18, 2022. In a press release, Mayor Lawrence noted Sherrer’s current employment as a firefighter and Captain for the Vienna (Volunteer) Fire Department. The press release also states that Sherrer’s “extensive work experience in the areas of management and planning will assist existing staff, Council (present and future) and this community in charting the course for what Jasper has to offer.” Speaking at the end of the meeting, Sherrer said he plans to have a five-year plan ready within 90 days to “grow the department to match the city.”

Sherrer will succeed Steve Roper as Jasper’s Fire Chief. Roper’s retirement was recognized by the council, and Mayor Lawrence presented Roper with an award on behalf of the City of Jasper saying, “This is for Fire Chief Steve Roper in appreciation of 38 years with the City of Jasper and 23 years serving as Fire Chief.” Roper was also presented with a plaque that, in part, read “Steve trained and learned how to be a firefighter … moved through the ranks and was appointed Fire Chief on October 4, 1999. Steve was an advocate for the Jasper Fire Department. While Steve was Fire Chief, the Jasper Fire Department provided excellent services to the City of Jasper. This fire station is dedicated in the honor and recognition of Steve Roper’s exemplary service to the citizens of the City of Jasper, Georgia.” The plaque will be placed at the new fire station. Roper was given his helmet and the opportunity to make his last call during the meeting, signifying his official retirement. “It has been an honor to serve .. you for the better part of my life. Thank you,” Roper said before leaving the meeting for a final ride in the fire truck.

The council also took action on the Downtown Development Authority’s planned Second Saturday events. Previously discussed during a March 2022 meeting, the DDA plans to hold an event on the second Saturdays of May, June, July, and August. The council approved a $20,000 total expenditure to be used for all four events. The expenditure would be used to cover the costs of a stage and performing bands, among other expenses.

The council approved revisions to Jasper’s alcohol ordinances in a continuation of a discussion that took place during a previous work session. During that work session, City Manager Sonia Jammes explained the purpose of the revisions is “to evaluate some of the economic needs and long-term liability and sustainability in our downtown.” The discussion at the work session was focused on two sections of the ordinance: pouring licenses for independent living facilities and food sale requirements for high-end beer service. At the recommendation of City Attorney David Syfan, the council agreed that independent living facilities should be allowed to obtain pouring licenses, but businesses planning to sell only high-end beer should have a food sale requirement.

Frank Leist updated the council on continued plans for the Veterans’ Memorial Park during the meeting. Phase two, as Leist called it, will include an expansion of the existing memorial and the relocation of a monument that is currently located at the Pickens County Courthouse. “We are going to honor the 55 Pickens County Veterans who passed away during war conflict,” Leist said of project. He also noted that fundraising is already underway, but he plans to wait for the project to be fully funded before development begins.